First Aid for Cuts and Scrapes

Knowing first aid for cuts when someone has been hurt can make a big difference to the outcome. 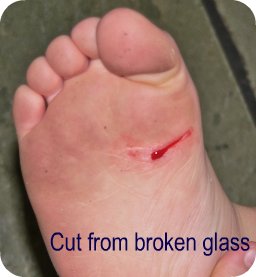 Often cuts and scrapes can be treated at home, but more severe cuts require prompt first aid and may need medical attention.

IN-DEPTH EXPLANATION of the above steps for first aid for cuts and scrapes:-

First Aid for Cuts and Scrapes - So what do I do?

If possible, before you touch the bleeding area wash your hands with soap and water.

If you have synthetic gloves "fantastic". Use them to protect you from possible transmission of the unfortunate nasties that can be in peoples' blood (which is the primary reason why gloves are used in these situations). Otherwise if possible avoid coming in contact with blood which is easier said than done.

First Aid for Cuts - What about the bleeding? 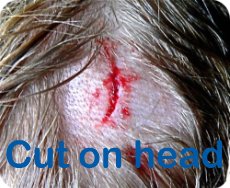 First Aid for Cuts - Once the bleeding stops what should I do?

You will need to clean the cut. Flush the cut with clean water. If possible put the wound under running water or fill a tub with tepid water and pour it from a container or cup over the wound. If you are away from running water normal saline is ideal for wound cleaning.

What is tepid water temperature?

Put your finger under the flowing water if you do not feel a difference in temperature of the water compared to you hand (so long has you have not had it under hot water for a while) you then have tepid water temperature. Another way of putting it is lukewarm so not warm and not cold.

First Aid for Cuts - How do I clean the wound?

Using just water or normal saline on the wound itself should be adequate to remove most debris or bacteria. If any debris like dirt, grass, hair etc. remain remove these with sterile tweezers or if not available use tweezers cleaned with alcohol.

I find that water works fine to clean the surrounding area but you can use a mild soap if required, but don't get soap in the cut. Soap will only irritate the open wound and cause discomfort to the person.

Thorough wound cleaning reduces the risk of infection and tetanus.

First Aid for Cuts - Should I use an antibiotic ointment?

This is up to you. Here are some things to consider:

Most minor cuts and scrapes will heal just fine without antibiotic ointment. These types of products don't make the wound heal faster, but they can discourage infection and allow your body's healing process to close the wound more efficiently.

Certain ingredients in some ointments can cause a mild rash in some people. If a rash appears, stop using the ointment.

An appropriate dressing and bandage can do pretty much the same thing.

First Aid for Cuts - Should I use a wound dressing?

This depends on the wound and its size.

With larger cuts initially you will cover the cut with a dressing and bandage to prevent bacteria from getting in. Bandages can help keep the wound clean and keep harmful bacteria out. After the wound has healed enough to make infection unlikely a dressing may no longer be needed.

Change the dressing each day to keep the wound clean particularly if the wound is oozing. Ooze can be a breeding ground for bugs therefore cleaning the wound and changing the dressing daily is important in stopping the bugs partying and breeding in your wound.

First Aid for Cuts - When are stitches needed?

Stitches may be needed for deep wounds so more than 1/4 inch (6 millimetres) deep.

First Aid for Cuts - When should I use steri-strips or the like?

With smaller cuts you may be able to pull the edges together with a strip or two of surgical or cloth tape. These tapes may be called butterfly tape or Steri-Strips. 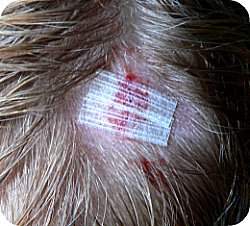 If the mouth of the wound does not pull together neatly see your doctor as soon as possible as correct closure of cuts within a few hours reduces the risk of infection and severity of scarring.

First Aid for Cuts - What should I do about scabs?

If the wound is small just leave them. Scabs are the body's original bandage. They form to protect wounds from dirt. It's best to leave them alone and not pick at them, tempting as that maybe, as the area can become itchy. They will fall off by themselves when healing has finished underneath them. Clever hey. 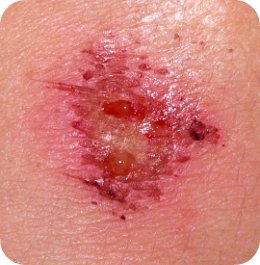 If the wound is larger, scabs can hide bacteria under them. The cheeky bugs can have a breeding party under the scab. Therefore larger wounds usually heal better with a clean, moist dressing that is changed daily. There are dressings that can remain on longer, these are called occlusive or semi-occlusive dressings, but have a medical professional recommend if this is best for you. You can buy them in drug stores/chemists over the counter without a prescription. So if you have seen a doctor or nurse they can tell you what dressing is best for the wound.

First Aid for Cuts - When should I call my doctor?

If the below occurs at the time of injury:-

If the below occurs at a later stage:-

Some points to note about a severely bleeding cut

Please refer to First Aid for Severe Bleeding for more on severe bleeding.

Also when you need to give first aid for cuts making a good assessment when you have someone bleeding is vital. Having an understanding of bloods appearance and function can make all the difference to the end result. So let's find out more about blood and bleeding...

What to put in a First Aid Kit

Maybe you need to put together a First Aid Kit, for your home, car, motorcycle or next backpacking or hiking trip. Then checkout our First Aid Kit Checklists.