Nosebleeds
What do you do? 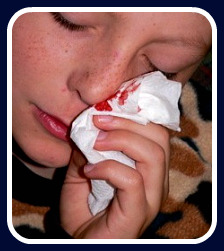 
Sitting forward will help avoid swallowing blood, which can irritate the stomach and make the person feel sick. Tilting the head back can block the airway and cause difficulty breathing. Also the blood going down the throat may cause the person to cough, therefore increase the blood pressure in the head, which may dislodge any clot that is forming. Then we are back at square one.

Once bleeding has stopped do not remove any clotted blood that remains in the nose or blow the nose. This can be very tempting as the nose can feel blocked and difficult to breath through but resist as re-bleeding can occur so easily while the area is still fragile.

Avoid bending over for several hours as lowering the head increases the blood pressure in the nose and may dislodge the clot and bleeding may recommence. This can also be said for lying down.

If bleeding starts again blow the nose hard to dislodge and remove any blood clots and start the process again.

Now that your nosebleed is over, let's take a look at what nosebleeds are and what can causes them...

Maybe you need to put together a First Aid Kit, for your home, car, motorcycle or next backpacking or hiking trip. Then checkout our First Aid Kit Checklists.