The knowledge of snake bite first aid can be the difference between death and survival for a person that has been bitten.

Most species of snake are harmless but unless you are absolutely sure that you have identified the snake correctly then treat the bite seriously and apply snake bite first aid - See instructions below. 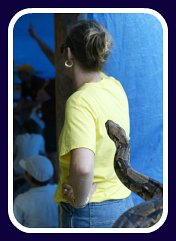 The most common symptoms of all snakebites are:

Some definite No No's for Snake Bite First Aid

(This pygmy cooperhead was nearly stepped on.)

If it is not possible or safe to take a photo then make note of some characteristics of the snake. Here is an article on snake identifiers:-

What are the Snake Identifiers?

Now lets get down to the points that serve as snake identifiers:

* Length: When it comes to the length of the snake, the first thing that you have to do is imagine how it would look when it is stretched out. The small snakes would be up to 12 inches (30 cm) long and they would include snakes like red belly snake, brown snake. Then there are the medium sized snakes queen snakes, milk snakes, etc. And then you have the large snakes like the cobras, rattlesnakes, water snakes, etc.

* Shape: This acts as an important snake identifier. The question that you have to ask yourself is whether the body of the snake is slender, heavy or thick. The thick snake would include the cottonmouth, boa, etc. while the slender one will include the ribbon snake, vine snake, etc.

* Head: This might be a confusing snake identifier because many snakes are actually known to flatten their heads when they are threatened. This can be a bit confusing owing to the fact that pit vipers are known to have arrowheads.

Although it is a true fact that snakes can be dangerous, you have to remember that they usually keep to themselves. So, if you've found a snake in your yard or inside your home, worry not. The snake can be easily identified – all you have to do is take note of the identifiers I have listed above. This information can then be conveyed to a professional, who in turn will determine whether or not the snake is poisonous.

Old style snake bite kit that should NOT be used in snake bite first aid.

In extreme cases, where the victims were in remote areas, all of these misguided attempts using outmoded snake bite first aid treatments have  resulted in injuries far worse than an otherwise mild to moderate snakebite.

In worst case scenarios, thoroughly constricting tourniquets have been applied to bitten limbs, completely shutting off blood flow to the area. By the time the victim has finally reached appropriate medical facilities their limb had to be amputated.


Now you have read through snake bite first aid you may also be interested in learning about:

First Aid for Cuts and Scrapes