Sometimes severe bleeding is caused by major injuries like partial limb amputations, deep lacerations by a sharp object or animal attacks (like a bear or shark attack) can not be stopped by direct pressure.

Using a Constrictive Bandage/Tourniquet is a LAST RESORT so if you have not already done so go to First Aid for Severe Bleeding. 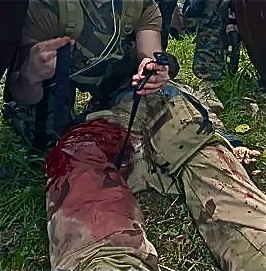